"First the girls, then the fish, then the oil..." Legendary (last) words by my fishing partner for the weekend, Boris. Having both migrated to Norway to marry a Norwegian girl, the two of us set off on our next conquest. Catching a Norwegian salmon, quite possibly a more daunting task than the first!

Being total novices when it comes to salmon fishing, the two of us were determined not to let the fish get the better of us due to inferior equipment, meaning the fishing store up the road did some good business off the two of us in the week leading up to the trip.

Spirits high we set off early Friday morning for the 6 or 7 hour drive up to the north of Norway, near to where the Orkla river meets the sea. The Orkla river was our destination and catching at least one salmon was our game. Partly due to the buying out of the sea fishermen that span nets at the mouth of the river (the game fishermen and several tourist outfits put together enough money to cover a normal paycheck for three months of fishing for these fishermen, in effect paying for the fishermen to take a three month holiday), there had never been as many salmon caught as this year, or so we were told. Spirits eased off a little in the car as we listened to stories from insiders on the odds of actually catching a fish, but confidence remained high as we viewed photos of other salmon already caught in the three weeks prior.

The first night we vowed not to go to sleep until having caught our first fish, but at 6.30 in the morning of the next day with not even a bite to show for our all night efforts (well, we did have a near empty bottle of whiskey and some empty beer cans to show), we decided to take a nap after all

After waking up and grabbing some food from the gas station across the road, we headed back to the river for another try at about 3 pm. Here's the fields we walked through to get to this side of the river: 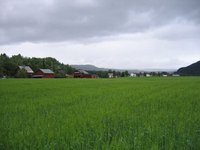 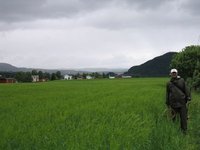 More superb fishing, this time after some advice from more experienced salmon fishermen who had actually caught something, but still nothing to show for it my 8 pm was starting to p**s us off

So we drove an extra fifteen minutes and decided to have some pizza to get us back on track.

Seeing as the Sunday was our last day and we still had to drive home not too late (certain persons writing this post had to be back before 7 or 8 pm to celebrate one year wedding anniversaries....) we decided to get up at 4 am and give it another try. The great thing about the north of Norway in June/July is that it is constantly light. This is how light it was at 4 in the morning: 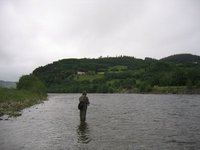 Here Boris is displaying the technique that's used to fish for salmon: 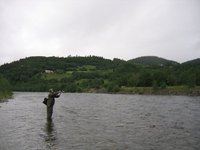 The trick is to throw somewhat upstream, let your bait drift downstream and in a circular motion it will automatically head back towards the shore due to the current of the river. Then you start pulling it back towards you. After every 5 casts or so, you move about a meter downstream and cast another 5 times. The goal is to annoy the fish so much by pulling your bait in front of it's mouth that it bites at it (because they aren't really feeding when they're in the rivers).

Anyway, did we catch any fish? No. Did we analyze all our mistakes and decide how we are going to do it better next time? You betcha!!!

The moral of the story... the oil will have to wait until next year!

Posted by Sam I Am 17:27 Archived in Norway Tagged backpacking Comments (2)

Stuff for the apartment

How boring, I've been shopping for furniture ...

So, this is going to be one of those typical posts that interests no one except for me... and I guess my wife

Yesterday we managed to do some speed shopping and picked up a great new bed, washing machine, dryer and fridge, all for the budgetted price. On the list for later today, a couch. That should take care of all the basics, although we need some tables and a desk.

I have my new internet connection sorted too, should be a lightning quick one, although I controlled my urge and didn't splurge on UPC's Extreme connection which boasts speeds of something around 26 mbps at times!!!

Okay, to give this post some color; here's a photo of me sitting at work right now. Don't mind the grumpy look and yes, I should shave! 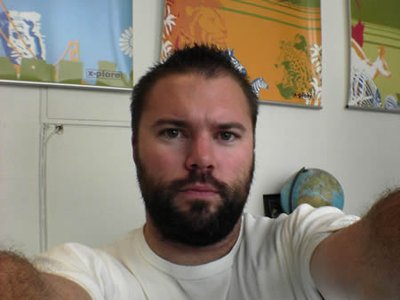 Posted by Sam I Am 01:57 Archived in Norway Tagged armchair_travel Comments (1)