Postcards from all over the world; thanks everyone!

I grovel in front of all of you in apologies!!!

I've been terrible at thanking all of you for the wonderful postcards I received. Every time I saw someone thank someone in the postcard thread it reminded me just how slack I'd been! Anyway, some of the photos below I took weeks ago already, it's just been my lazy self that didn't get them uploaded before today! So, in rough order of when I got them, here are the cool cards that I got

First off CupCake.... had some problems with postage but not when it came to the cards to Norway. They all came through without a problem (although one or two had 'insufficient postage' written on them !). I took this photo the day CC hit her 5000th post, hence the congrats on the picture. 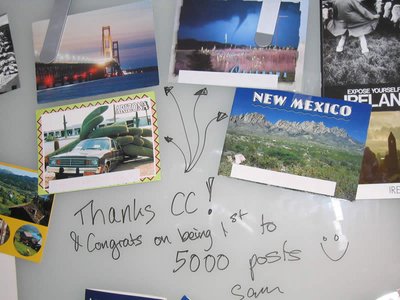 On to the next cards, this time from Indonesia and Australia. Zags sent me two cards which came within a day of one another. Something about the first one being boring, but I liked both! And a very funny card from Ali G in Australia, just the way it should be when you get a card from Ali G! 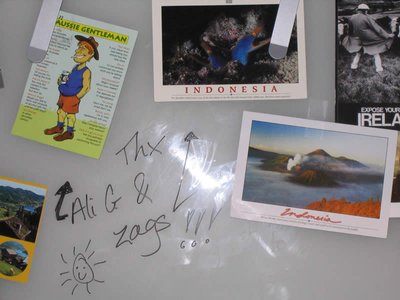 Nikki and Arjan just couldn't help themselves when they saw this card I think.... especially if it was lying in the pub depicted I'd imagine

This card has put Ireland on the map even more than before for a visit hehehe. Speaking of visits, Montreal is less than a month away and that's where this card from Tway was from. I'm really looking forward to the meetup and TP creating some havoc in the Canadian nightlife scene. The text I wrote kind of doesn't show very well, but it says "Yay, Montreal, here we come!" 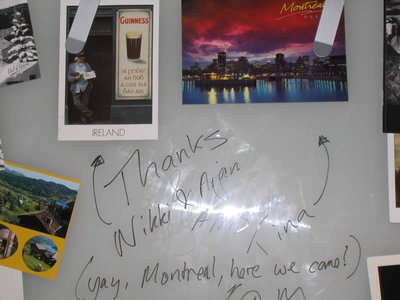 The theme of the cards I receive seems to be beer. I wonder if that's my doing or the senders.... in lieu of that, the card from beerman and isa that I received last week was of an old brewery near where they live which has gone out of business. Could be an interesting investment??? TP beer would probably sell well (not to mention martinis if you can make those in a brewery)! Pardus couldn't stay behind and sticking with the cow theme sent this postcard from Switzerland. 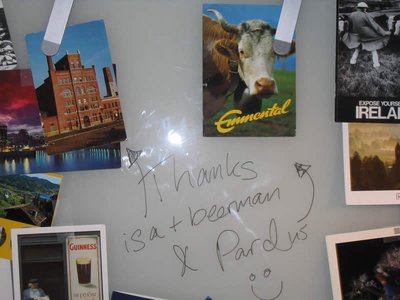 It's the latest addition in what is quickly becoming an overfull board!!! Check out this overview picture... it certainly makes working in my 'new' office so much more pleasant!! 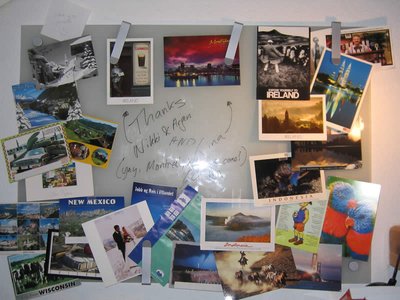 Now, I think I might have officially missed thanking for one or two cards. Please accept my sincere apologies in case it was one of yours. I really appreciate all the cards and always stick the new ones in the middle for a while. It's so inspiring!!!

Posted by Sam I Am 11:51 Archived in Norway Tagged postcards Comments (4)