I've been contemplating doing more 'work related' posts on this blog for a while, and have decided I'll bite the bullet and try and get one post up a week. Most will likely be the ravings of a lunatic as all 3 of you readers expect from me, but some might just be worth reading. Subscribe, and you'll see...

Nothing too exciting about the trip itself. SAS from Oslo to Heathrow, the underground into the city, dropping off my bag at the YHA in Central London, and then catching the DLR (Docklands Light Railway) to ExCel (why the capital C by the way?!) where the World Travel Mart is held. This all went smoothly, although it does always strike me that getting around a big city like London must result in a colossal collective waste of time.

For those that have never been, here's a map

I only had time to plan two meetings before Travel BlogCamp commenced that evening, but it was good to catch up with people I chat with regularly via email and Twitter. My second meeting was with Pete from Eurocheapo, whom I hit it off with right off the bat. Seeing as I didn't bother getting a pass for the two hours I was there, we had to do this meeting in a bar outside ExCel, a setting I'm not really comfortable with, but one makes by with what's available I'm told

The cool thing about Pete is that he's part of a sibling team running a pretty big travel website. Sound familiar? After this meeting we set off back into London to find Doggett's riverside bar, the venue for TBC (yes, in the travel industry everything has an acronym...).

Doggett's bar is located right on the river and the view from the balcony on the top floor, where food was served, was fantastic. It was great to meet up with lots of new folks, and say hi again to a bunch that I've run into before at conferences. The food was good and everyone loosened up pretty quickly from what for most had probably been a long day at WTM.

The event was laid back and had some very interesting discussions, though I would have liked to have gotten even more into what people were actually getting out running travel blogs and posting on Twitter (funnily enough, Twitter came up a lot), how they were monitoring this and so on. In all our excitement to always try the next best thing, we sometimes lose focus on the fundamentals.

The presentation I enjoyed the most was without doubt Murray Harold of Advantage Travel. Not only was he probably the best speaker, he was also the easiest to understand further back in the room, though the two obviously go hand-in-hand. But it was the message he was bringing that I thought was particularly refreshing. He talked about the added value of offline agents and how social media can help them possibly even more than online travel because they already have that connection, which, let's face it, is exactly what social media is all about. Even if you don't run an offline travel business, you need to appreciate and realize the massive industry this is, and if these players get their act together, it will spell trouble for the super low margin online players. There's clearly room for both models, but I'm in agreement with Murray that social media has the most potential for the offline agents, especially the smaller ones that are still relatively nimble.

A few other titbits I enjoyed on the evening

Discussion on libel in which the Times noted they pre-moderate comments. That just boggles my mind to be honest... (update: I wanted to clarify that what boggles my mind that they pre-delete/edit comments for libel purposes. For non verified comments on Travellerspoint blogs, the first comment by a user is also pre-moderated by the blog owner, but that's to combat spam, not libel) I realize they are a sizable company and worried about libel etc, but if there's one thing I know a little about, it's user generated content. In the 7 years of running Travellerspoint, we've maybe seen 5 companies threaten us with a law suit (off of probably 1500-2000 UGC entries per day by our users). There were maybe one or two that were in the right, the other 4 were kindly told where to go. The others had whatever it was deleted and that was that. Clearly there are a lot of website owners/administrators that are quite afraid of the legal risks that are out there, but I honestly see spam as a much bigger problem.

Everyone got quite caught up again with the possibilities of Twitter. In this discussion I was blown away that some companies make a conscious decision never to publicly respond to criticism on Twitter, preferring to hide behind a DM, or if they aren't mututal followers my guess is nothing? That just seems wrong on so many levels in today's very transparent society that I didn't realize companies still thought this way (especially the type that would be attending an event like this). Unfortunately we didn't go into this too much on the evening as I would have liked to have heard if they will respond to negative blog posts.

Anyway, in closing, I really like the style of this kind of event and thoroughly enjoyed connecting with a whole bunch of folks from across the industry. People are so friendly and helpful, even though at some level most are competing in the same space. The travel industry must bring out the best in everyone! Thanks once again for putting on such a great event Darren!!

Posted by Sam I Am 05:26 Archived in England Tagged business_travel Comments (2)

Last Saturday there was a small gathering of Travellerspointers in London that I was able to attend. Originally planned by Hien to coincide with Holly's (soupatrvlr) stay, I got to meet a few members that I've only ever virtually chatted with before (soupatrvlr, 3L, magykal1 and t_maia), as well as say hi again to a couple that I had at some stage had the honour of meeting somewhere across the globe (GregW, Hien)

A big thanks to Greg and Hien for the planning. Tattershall's was a good place to start it off, and the sausages and mash (with red onion, yum) there really hit the spot! We then took in the big black box and other assorted artwork at the Tate, before stopping at a pub that apparently featured in Bridget Jones', Lock Stock and a Harry Potter movie, on the way to All Bar One (yes, another pub). Topping it off was dinner at a souk. By the end of that my 4.30 wake up call that morning had me pretty nackered, and the thought of another 4.30 wake up call on Sunday left the smart side of my brain saying goodbye to the others.

Here's two pics I took (yes, I should have taken more!) 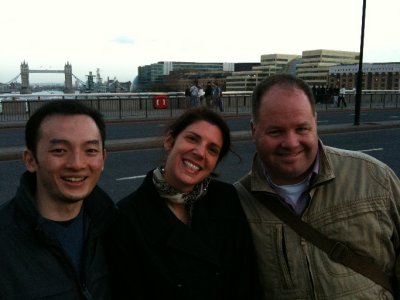 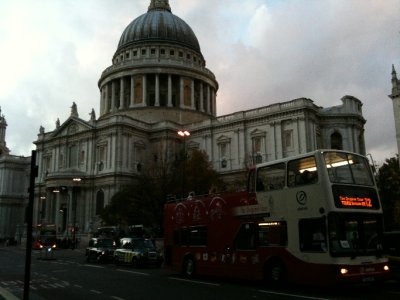 Taken from the 'Eye Flight'. 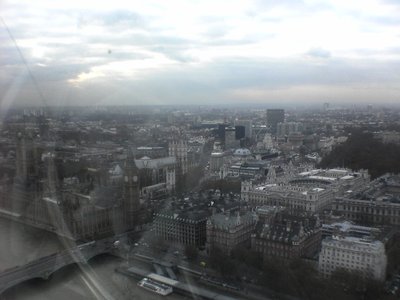 Posted by Sam I Am 15:10 Archived in England Tagged business_travel Comments (0)