A cod of around a kilo... caught on her third throw. Definitely has more fishing luck than her old man 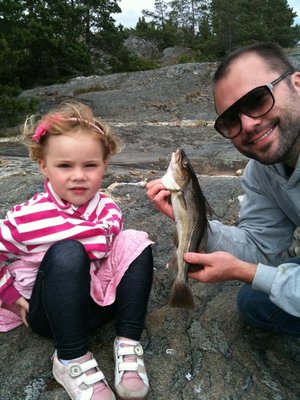 Malia and me are ready! 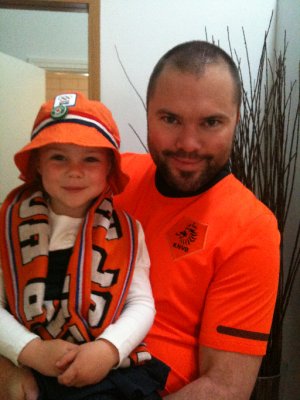 So since May 14 Twitter search has started doing something which is actually pretty cool, by not only returning the search query if it's in the body of a tweet, but also if it's in a shortened link that's a part of a tweet. So whereas in the past a tweet like "I love Travellerspoint" would show up if you did a search for Travellerspoint on Twitter, a tweet like "I love bit.ly/Ttzz4" would not. That all changed on May 14 though, and now a search for Travellerspoint would bring up both those tweets.

This is obviously super useful for those of us that like to see who is talking about us or our companies and brands. Conveniently, Twitter also lets you subscribe to search results, so do the search once, add it to your feed reader of choice and you'll automatically be notified any time someone mentions you or links to your site on Twitter, shortened URL or not.

So that's all great news, right? Why then did this change actually make it harder for a lot of people to track mentions on Twitter? 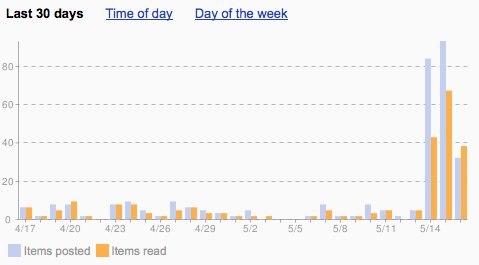 See that jump on May 14? That's all these shortened URL's being picked up on by Twitter Search and being reported back to me. While it looks great that so many people are mentioning us, the downside is that a lot of these 'mentions' are actually from accounts that are run by folks that work at Travellerspoint, or automated accounts like the Travellerspoint one, that are there to let people subscribe via Twitter to new content being posted on Travellerspoint. Why would I really want to see mentions of Travellerspoint if it was me or an account I control doing the mentioning?

Or to use a different example, if you are a travel news site like tnooz, where your content is often retweeted by one of several editors, in addition to the tnooznooz account, you're quickly going to get lost tracking retweets that don't really matter for your (I assume) end goal: finding out what real people, outside your company, are saying about you. In attempting to fix this, the first place I went was Twitter's advanced search form, which really is quite fantastic, but sadly didn't offer an obvious way out. You can find all tweets by a person, but not all tweets excluding a person, or at least that's how it looks at first glance...

Here is a normal search on Twitter for all mentions of tnooz, including all times tnooz is being linked to in tweets, shortened URLs or not: http://search.twitter.com/search?q=tnooz

Here is a search on Twitter for all mentions of tnooz by kevinlukemay, the main editor: http://search.twitter.com/search?q=tnooz+from:kevinlukemay Nifty, but rather the opposite of what we are trying to achieve.

All tnooz mentions, excluding those by Kevin! Those with an eye for detail will of course quickly notice that - (minus sign) in front of the from: in this link, and that's the only difference here. So while Twitter doesn't officially have this as an option in the advanced search form, it is very much supported.

Here's an even more useful search on Twitter for all mentions of tnooz, with 3 company accounts being removed: http://search.twitter.com/search?q=tnooz+-from:tnooznooz+-from:denschaal+-from:kevinlukemay. Now there you have something you can work with in terms of tracking your site's mentions, or possibly even better, those users mentioning your competitors...

In other words, just add +-from:<twitteraccount> to the query string for every account you don't want to have show up in your search results, and you are good to go. Too easy!!

Okay, so clearly those 'skillz' need some work, but I managed the hill bit okay

Just a few weeks ago I would have been flat on my face even approaching it!!

Waterskiing, on snow... with x-country skis

Malia got to ride the snowscooter while Margit and me got towed behind it. Surprisingly enough, I managed to stay standing the whole way 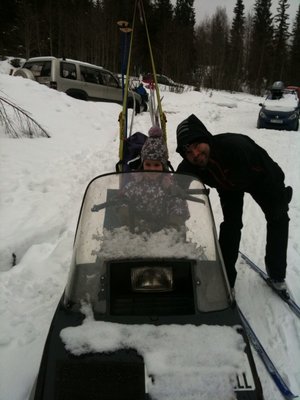 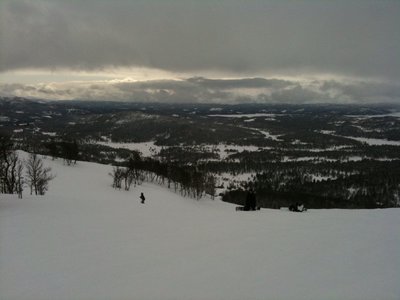 From now on Heineken is my preferred beer of choice. They just get it.

Stumbled on this beautiful time lapse video from Dubai by Philip Bloom.

I've never really been that enticed to visit Dubai, no matter what the Dubai tourism board spends to promote the destination. But having seen this, I might reconsider. I love how the internet is making this kind of sharing of destination specific highlights easier, but wouldn't it be really nice if DMO's (Destination Marketing Offices) also started focusing on using great footage like this more?!

On a side note, man, Vimeo is so much nicer than any other video sharing site!

Posted by Sam I Am 10:12 Archived in United Arab Emirates Comments (0)

. The future of boarding passes everywhere. This was mine last week:

(only on phone, nothing printed).