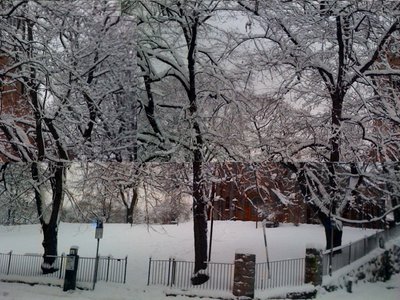 I love this photo... 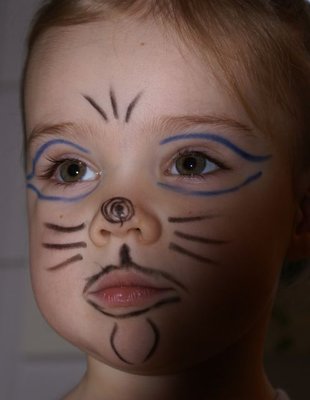 Considering her father, Malia was surprisingly good on skis her first time! We were in the mountains right behind Morgedal and had a little fire going on a bit of land nestled between two lakes. Temperature around -10 celcius and plenty of snow as you can see

After skiing and something to drink, it was time to try out the little sledding track that we created. Perfect for the three kids that were along (ages 2-5). 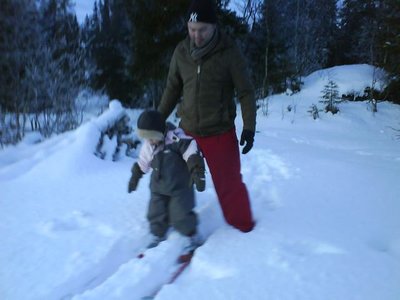 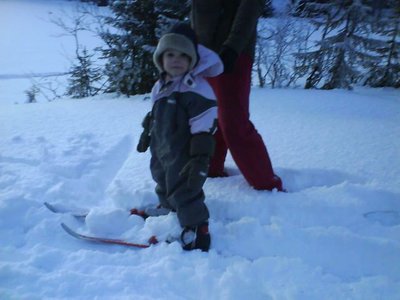 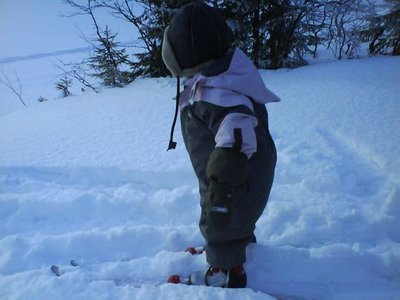 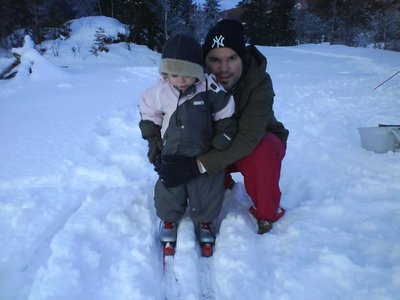 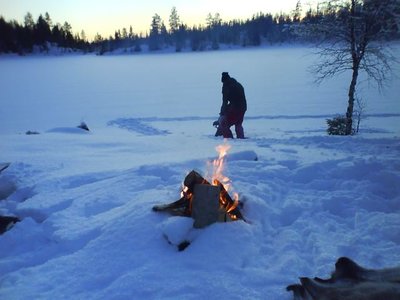 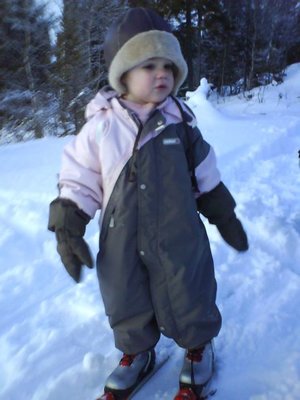 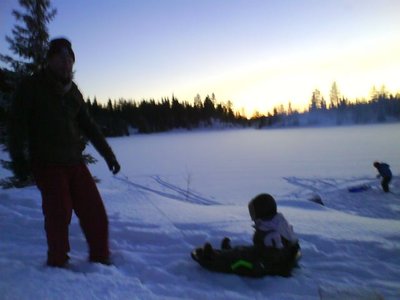 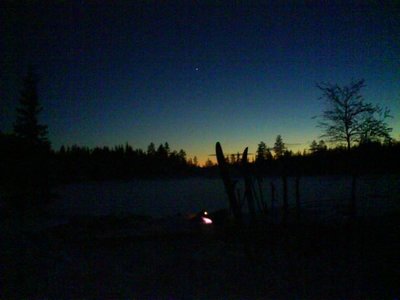 And here's some videos too.

Posted by Sam I Am 03:25 Archived in Norway Tagged family_travel Comments (1) 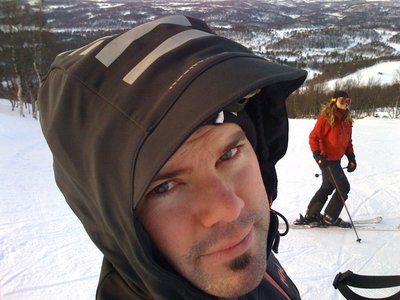 Was reading an article in Norwegian on Dagbladet on what looks like an absolutely fantastic hotel in Phuket. Of course it's not a budget place (plenty of those here on TP), but it looks fantastic nonetheless. This article is in part to test if our twingly pinging is now working

When I see things like this I just wish I was a kid again. Or was travelling with a kid on this particular trip so I'd have an excuse to climb into the cabin of this beauty. What a great piece of entertainment for those travelling with kids! If you happen to be flying out of Oslo, it's around gate 40. 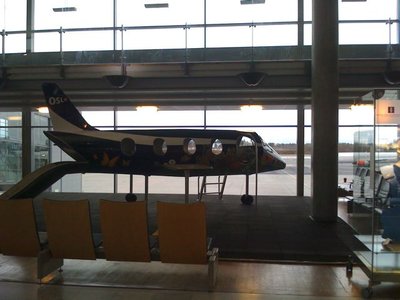 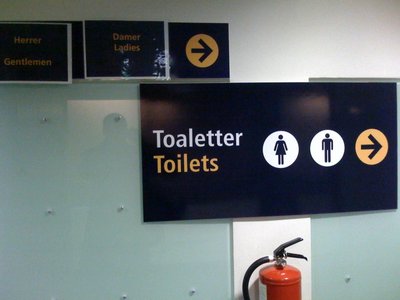 While taking the photo a guy and girl walked into the right (which was a ladies rr). Do the people putting up signs actually ever look at them?! FAIL!

Please have a look at this photo and tell me what is wrong with it? 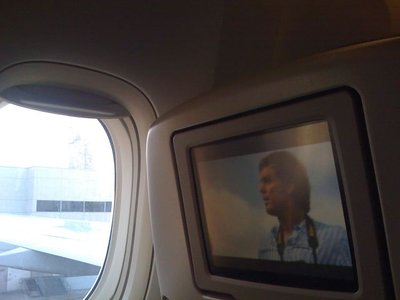 That's right; "In Flight" entertainment while the plane is on the ground!

Air New Zealand, you have made me a happy man; a very very happy man! On my flight last week to Phocuswright in LA (more on that later), I had the extreme pleasure of flying economy class with Air New Zealand. I've always been happy with Air New Zealand actually, but having the stewardess announce that the entertainment system was fully operational from the moment you got on board just blew me away! That now is what all airlines will have to measure themselves with going forward. Hats off to Air New Zealand for doing something which doesn't seem difficult but is so brilliant that it boggles my mind no one else has come up with this.

This to me is probably the biggest innovation in the economy class of the airline industry since they started serving meals in flight. A flight for me usually comes down to the entertainment on board. Sure, I want the flight to arrive at the other end more than I want my entertainment to be good, but assuming the first is going to happen the second is by far my biggest joy (or grievance) with any carrier! I have penned 4 page complaint letters on flights started off because the entertainment wasn't working and in my experience the flight quickly goes downhill from there (that was Air France by the way, an airline I vowed to avoid at all costs going forward). I've banged my hand at the screen in frustration with flickering movies and don't even get me started on planes that just have one big screen at the front that you're supposed to follow. Yet along comes an airline from a land where they have more sheep than human beings and they come up with what is truly the biggest innovation for the mass airline industry in a very long time. Can you tell how much I love this?

The whole experience was made so much more meaningful after hearing Tim Simonds, the Managing Director for Customer Strategy and Metrics of United Airlines present at Phocuswright in a session called (please swallow coffee before continuing your read) "Customer Experience and Flying: Not an Oxymoron". Yes, that's UNITED AIRLINES presenting that session!! The entire session was on the business end of the plane and specifically the new bed which will lie down flat. Forget the 95% of travellers that is stuck in the back of the plane; not once were they mentioned! As you can read over at Crankyflier (great site by the way) Tim rightfully got some feedback on this in the Talkback time after he was done presenting. In my humble opinion, Phocuswright made a big mistake here inviting an airline like United over for example Air NZ which actually does seem to be doing something about customer experience. Now I'm not sure if they only allowed paid speakers here because quite a few of the presentations felt like sales pitches, but it surely doesn't take a rocket scientist to figure out United is not the best airline to be speaking here.

Other little details I enjoyed about the flight: 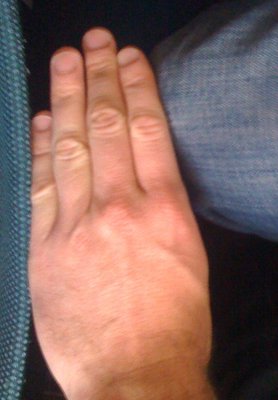 I haven't been paid by Air NZ, yes, I actually paid for the flight. I wasn't upgraded by them and yet here I am taking several minutes out of a busy day to point out that I really enjoyed flying with them. Other airlines should take some serious note.

For my trip to Australia next June the other airlines will be starting off at a serious disadvantage when I start looking at carriers. I'd gladly pay a little extra to experience this again. Thanks Air New Zealand!

Oslo World Music Festival. Malia decides she has to stand and dance right up front. Not something she learned from me 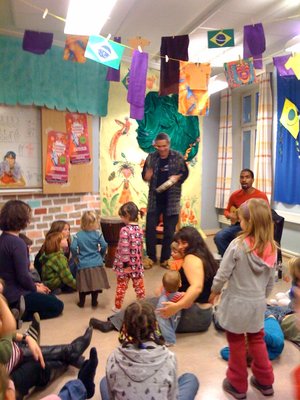 Note to all; this is my daughter, not the president elects daughter. And no, we didn't know his daughter was called Malia when we picked the name off a song on our ipod

But if his judgement is anything like his taste in names, the US is going to come out stronger! 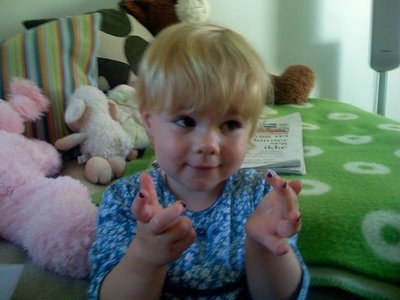